Warm and Wet May, and an Action Packed Spring: May 2018 Summary and Spring Recap

After April timidly transitioned into milder weather, May was plenty bold in the thermal department, on multiple occasions behaving more like summer than late spring. Most NJ residents did not seem to mind the warmth; rather, from the second week onward, it was the frequent episodes of rain, often targeting weekends, which raised the level of crankiness among many!

The month began on the dry side. In fact, 24 brush fires were reported around NJ on the 3rd. Evening rain dampened the ground in the north, with 0.66” falling at West Milford (Passaic). There was little more rain until the 10th, when some strong evening thunderstorms delivered quarter size hail to a few locations in Morris and Sussex counties. Two stations in Chatham (Morris) caught 0.74” and 0.71”, Denville (Morris) 0.67”, and Harding Township (Morris) 0.66”. Most of the area north of Interstate 78 saw 0.20”–0.40”, with less or none further south.

Off and on rain plagued the state from the pre-dawn hours of the 12th into the early hours of the 14th. The southwest saw the heaviest rain later on the 12th, with the south again in heavy rain later on the 13th. Of the 210 CoCoRaHS reports, Woodstown (Gloucester) led with 3.61”, followed by Monroe Township (Gloucester) 2.84”, Franklin Township (Gloucester) 2.76”, Hammonton (Atlantic) 2.65”, and Fairfield Township (Cumberland) 2.56”. Some 26 stations had more than 2.00” and 107 between 1.00”–1.99”. The southern third of the state saw the most rain, which tapered off toward the north, where Palisades Park and Vernon Township (Sussex) each picked up just 0.33”.

The most severe weather episode of the month unfolded on the afternoon of the 15th, with a squall line dropping from north to south, finally stalling over the far south. Strong winds seriously impacted Monmouth and Mercer counties northward. A 66 mph gust struck Caldwell Airport (Essex), with 53 mph gusts at Newark (Essex) and Morristown (Morris) airports. Haworth (Bergen) had a gust to 52 mph, Charlotteburg (Passaic) 51 mph, Sea Girt (Monmouth) and Seaside Heights (Ocean) each gusted to 47 mph, Stewartsville (Warren) 46 mph, and 11 additional NJWxNet stations saw gusts of 40 mph–45 mph. There were widespread tree falls, which injured several people, damaged homes and cars, brought down numerous power lines, and closed many roads. Rice to marble size hail was reported at a few locations in Sussex, Morris, and Hunterdon counties. The northern two thirds of NJ received at quick 0.25”–0.50” of rain, while 0.75”–1.50” totals were common further south. Two Estell Manor (Atlantic) locations caught 1.69” and 1.67”, Egg Harbor Township (Atlantic) 1.41”, Galloway Township (Atlantic) 1.28”, and 1.27” in both Ocean City (Cape May) and Upper Deerfield (Cumberland).

Morning and afternoon showers on the 22nd were followed by pre-dawn thunderstorms on the 23rd. They brought 0.50”–1.00” to the northern half of the state, with totals tapering to a few tenths or less along the southern coast. Holland Township (Hunterdon) saw 1.14”, Lebanon Township (Hunterdon) 1.10”, Greenwich Township (Warren) 1.08”, and Roxbury Township (Morris) 1.01”. Some 97 CoCoRaHS stations caught between 0.50”–0.99”.

The final rain event of May began with scattered thunderstorms from the mid afternoon into the evening of the 26th, mainly in central areas (Figure 1). Storms became stronger early on the 27th, following one another (known as “training”) from west to east along the Interstate 195 corridor from Mercer to Monmouth counties. Belmar was inundated with 5.46”, followed by 5.04” in Eatontown, Hopewell Township 4.73”, Ocean Township (Monmouth) 4.66”, Manasquan (Monmouth) 4.39”, and Colts Neck 4.34”. Ten stations received more than 4.00”, 11 between 3.00”–3.99”, 20 from 2.00”–2.99” and 39 saw 1.00”–1.99”. In the northwest, Blairstown (Warren) and Newton (Sussex) saw the least, each with 0.04”. Some trees were reported down from strong winds in Monmouth County, while the main impacts of the storms were scattered areas of flash flooding and a few smaller rivers reaching flood stage. The Millstone River at Blackwells Mills (Somerset) crested about 3 feet above flood stage, which is about a one-in-five-year event. 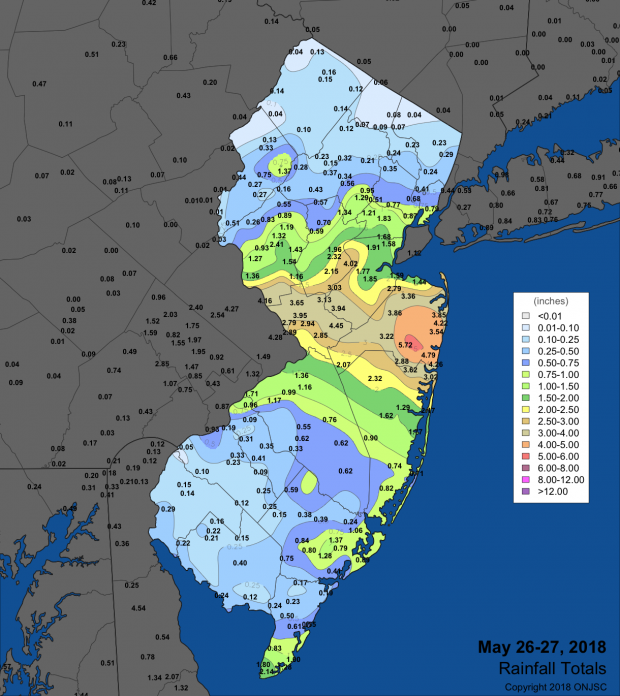 Figure 1. Rainfall totals from May 26th-27th. Observations include reports from NJWxNet, NWS COOP, and CoCoRaHS stations.

In addition to the previously discussed winds on the 15th, there were five other days in May where one or more stations gusted over 40 mph. This included a 47 mph gust at Pequest (Warren) on the 3rd, 40 mph at Pittstown (Hunterdon) on the 4th, Fortescue (Cumberland) hit 41 mph on the 12th, Seaside Heights reached 41 mph on the 18th, and Moorestown (Burlington) with 43 mph on the 26th.

There were ten May days where the temperature equaled or exceeded 85° at one or more of the 62 NJWxNet station. Six of these days made it to 90°. The parade of warm days began on the 2nd, when 11 stations reached 90°. A southerly wind off of Delaware Bay kept the maximum temperature to 69° at Fortescue. The 3rd found Sicklerville (Camden) and Toms River (Ocean) up to 94° and an impressive 44 stations between 90°–93°. The Atlantic Ocean provided some sea breeze cooling, with Atlantic City Marina (Atlantic) making it to just 72°. The early heatwave ended on the 4th, with Oswego Lake (Burlington), Sicklerville, and Vineland (Cumberland) each up to 91°.

A wide range in maximum temperatures occurred from the far south to far north on the 12th. Dennis Township and Woodbine reached 85°, while High Point Monument (Sussex) only made it to 51° and High Point (Sussex) and Walpack (Sussex) each reached 53°. Haworth (Bergen) and Oceanport (Monmouth) got to 91° on the 15th. The 20th saw 86° highs at Cape May Courthouse (Cape May), Upper Deerfield, and Vineland.

Nine May days found the minimum temperature at or below 45° at one or more NJWxNet location. It bears mentioning that a malfunction with the thermistor at perennially cold Walpack resulted in the absence of data from that location after the 15th. The 1st was the coldest morning of the month and the only one with subfreezing temperatures. Walpack dropped to 28°, Pequest was 29°, Hackettstown 31°, and 28 stations were between 34°–39°. Walpack jumped to 80° and Pequest 81° during the afternoon of the 1st, resulting in an unusual 52° diurnal temperature range. Walpack and Pequest each fell back to 40° on the morning of the 2nd. Kingwood (Hunterdon) fell to 45° on the 7th, Walpack was 41°, Berkeley Township (Ocean) 42°, and Howell (Monmouth) 43° on the 8th, Berkeley Township 39° and Walpack 40° on the 9th, and Hopewell Township and Walpack each 41° on the 10th. On the 12th, High Point Monument bottomed out at 41°, High Point 43°, and Wantage (Sussex) 44°. A chilly 13th found the Monument recording a minimum of 42° and a maximum of only 47°, while High Point ranged from 43°–49°. These two stations fell to 40° and 41°, respectively, on the 19th.

With the freeze season over, it is worth a look at which locations had the longest and shortest range of days between the first fall and last spring freeze. On the long end, Walpack first froze on October 3rd, with May 1st the last freezing minimum, thus a range of 211 days. This was followed by 199 days (October 17–May 1) at Pequest and 198 days (October 17–April 30) at both High Point Monument and High Point. On the short side, Atlantic City Marina had a range of 133 days, from November 10th to March 22nd. Next shortest was Harvey Cedars, at 144 days (November 10–April 2).

Being a transition season, spring often brings a wide range of weather conditions to the Garden State. This past spring was no exception, or perhaps better stated, in this regard it was exceptional. Pulling the months of March, April, and May together, the NJ spring temperature averaged 50.3°. This is 0.4° below the 1981–2010 mean and ranks as the 49th mildest of the past 124 years. Spring precipitation (rain and melted snow) across the state averaged 14.85”. This is 2.76” above average and is the 15th wettest since 1895.

March was more wintry than February, with below-average temperatures and multiple snow events. A new record for March snowfall in NJ was achieved in Jefferson Township (Morris), where 44.3” of the white stuff accumulated. The month had several windy storms and one where heavy wet snow did as much tree damage as Sandy in portions of central and northern NJ. April was the chilliest since 1982, which contributed to the spring green up running up to two weeks late. The table turned quickly in May, which, being the 5th warmest on record, helped pull the spring average almost up to normal. As May was the fourth consecutive month with above-average precipitation, concerns over rather persistent dry conditions during the fall and into mid-winter evaporated.