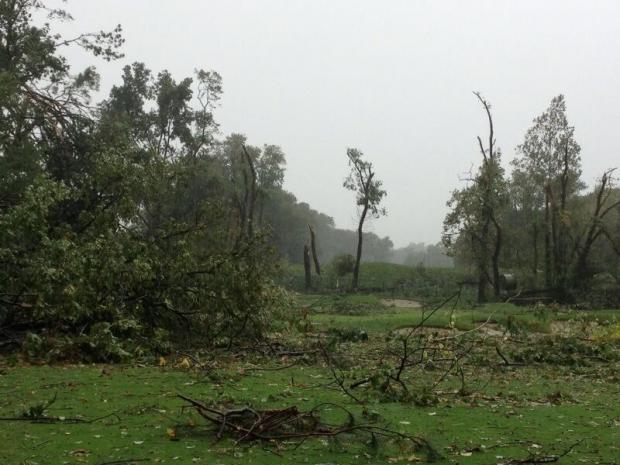 Following the past two October 29ths, it was wonderful to see sunny skies and seasonable maximum temperatures ranging from the mid to upper 40°s in the northwest to the low to mid 60°s in south this 29th. As a matter of fact, aside from a strong frontal passage blowing through the north on the 7th and a stubborn coastal storm impacting the south from the 9th-12th, conditions were quite tranquil throughout most of October 2013. A summer-like first week was the major contributor to the statewide monthly average temperature of 57.1° coming in 2.3° above normal. This ties with 1950 and 1951 as the 20th mildest October since statewide records commenced in 1895. With the exception of the far southeast corner of NJ, drier than average conditions prevailed. The 2.07" statewide value is 1.86" below average. Up north, the climate division encompassing Mercer, Somerset and Union counties northward received 0.98" of rainfall. This is the 5th driest October of the past 119 years, coming in at 3.38" below the divisional normal. The southern division averaged 2.68", which is 1.02" below normal and ranks as 46th driest.

The 1st -7th saw at least one station within the 53 station NJ Weather and Climate Network reach an unseasonably warm 82° or higher daily maximum. Seven stations topped out at 82° on the 1st, with 27 others at either 80° or 81°. The 2nd found New Brunswick (Middlesex County), Jersey City (Hudson), Red Lion (Burlington), and West Creek (Ocean) up to 85°, with High Point (Sussex) the coolest at 75°. Hammonton (Atlantic) reached 84° on the 3rd, with 9 others at 82° or 83°. The 4th was the hottest day of the month, with New Brunswick at 88° and 10 other stations 87°, while Harvey Cedars (Ocean) was coolest at 75°. Greenwich and Upper Deerfield, both in Cumberland County, reached 88° on the 5th, with Upper Deerfield again that warm on the 6th. The last 80° day of the month and likely the season occurred on the 7th when South Harrison (Gloucester) and Greenwich hit 82°.

Three other days later in the month saw stations reaching at least a 75° maximum. This included Hawthorne (Passaic) and Walpack (Sussex) at 76° on the 12th, Hawthorne and Greenwich 75° on the 15th, and Walpack 78° on the 17th.

The coldest morning of the month occurred on the 26th, when Walpack and Pequest dropped to 21° and 29 stations ranged between 24°-32°. This ended the growing season in all but core urban and immediate coastal areas, where Atlantic City Marina (Atlantic) only managed a 40° low. Walpack fell to 26° and Pequest 27° on the 27th. Another cold morning on the 28th dropped these locations to 22° and 23°, respectively, when 35 other locations were between 25°-32°. The 29th saw both Walpack and Pequest at 28°. A large statewide range in minimums occurred on the morning of the 30th when Walpack dropped to 26° and Atlantic City Marina only 55°.

Despite most locations having an October freeze, the growing season (consecutive days above 32°) continued into November at some locations. This includes Atlantic City Marina where the season began on April 5, thus as of October 31st it had lasted 210 days. At the other end of the spectrum, Walpack did not see the season start until May 28th and saw it end on September 23, just 119 days in length.

With rainfall quite sparse in most areas of NJ in October, above-average totals were still found in the far southeast. In Cape May County, Middle Township received 6.61" over the course of the month, with Dennis catching 5.30" and Woodbine 3.69". In Atlantic County, Egg Harbor Township received 4.60" and Hamilton Township 4.60". Driest conditions prevailed in the northeast, where the Bergen County communities of Tenafly, Saddle Brook, and Glen Rock totaled 0.41", 0.50", and 0.52", respectively. Elsewhere, Harrison (Hudson) and Montclair (Essex) both received 0.51" and Sparta (Sussex) saw 0.52".

Only two systems in October produced more than an inch of rainfall at one or more of the over 250 CoCoRaHS and NJWxNet stations located throughout the state. As the state and divisional monthly totals noted previously suggest, the main action was in the south. Showers from late on the 4th through the 6th were most productive in the far northwest and central coast. The highest totals included 0.73" in Montague, Newton (Sussex) 0.65", High Point (Sussex) 0.41", Wantage (Sussex) 0.32", Berkeley Township (Ocean) 0.27", and Toms River (Ocean) 0.26".

A cold front moved into NJ during the afternoon of the 7th. It produced some severe weather across northern areas that brought trees down onto cars, houses and wires in Somerset, Morris, Union, Passaic, and Bergen counties. The National Weather Service verified that an EF 1 tornado lasting from 3:16-3:18 PM crossed a portion of Paramus (Bergen). Winds were estimated to have been up to 100 mph along the 1.25-mile path of this 100-yard wide storm. No one was injured as the storm mainly passed through George Washington Cemetery and the Paramus and Ridgewood golf clubs. This brought the NJ tornado total for the year to 3. Winds gusted to 50 mph in Chatham (Morris) and 42 mph at both Basking Ridge (Somerset) and Sea Girt (Monmouth). Gusts ranged from 30-39 mph at 25 other NJWxNet stations. Rainfall on the 7th included 1.40" in Denville (Morris), Boonton (Morris) 1.16", and Peapack-Gladstone (Somerset) 1.15". Four other stations received more than an inch, 96 stations between 0.50"-0.99", and 117 from 0.10"-0.49", as all of NJ saw some rainfall. Remarkably, the 0.45" that fell in Haworth (Bergen) on the 7th was the only measurable precipitation event of the month at this and some other northeast NJ locations.

A strong area of low pressure meandered off the Mid-Atlantic coast from the 9th-12th. Some remnant energy from Tropical Storm Karen helped to energize and moisten this storm system. It brought heavy surf and some moderate coastal flooding at times of high tide. So too did heavy rain fall in Cape May County, with 3.74" in Middle Township, Cape May 3.54", Woodbine 3.49", West Cape May 3.47", Dennis Township 3.46", and Cape May Courthouse 3.33". Elsewhere in south Jersey 2.00"-2.99" totals were received at 26 stations, with totals tapering northward to the I-195 corridor as 41 stations caught 1.00"-1.99" and 23 stations 0.50"-0.99". North of there, a few tenths fell at best.

The coastal system produced consistently moderate to strong winds along the coast. Gusts on the 10th reached 41 mph at both Seaside Heights (Ocean) and Atlantic City Marina (Atlantic) and 40 mph in Harvey Cedars (Ocean). Peak gusts on the 11th were 43 mph at Harvey Cedars, 42 mph in Seaside Heights, and 40 mph at Atlantic City Marina. Seaside Heights gusted to 41 mph on the 12th. At Harvey Cedars, gusts of at least 30 mph were recorded for a remarkable 79 consecutive hours, beginning at 3:00 AM on the 9th and ending at 10:00 AM on the 12th. Gusts exceeded 25 mph for 109 consecutive hours.

The first snowflakes of the season flew for a few minutes on the 24th at some locations in the far northwest corner of the state. Not nearly enough were noted to accumulate, thus going into the observation book as a trace. A minor event on the morning of the 30th brought less than 0.10" to the southern half of NJ and once again nothing in the north.

The lowest barometric pressure of October occurred on the 23rd with most areas in the mid to upper 29.50"s. High pressure in the low to mid 30.40"s was tops for the month on the 29th. 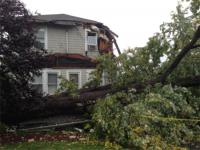 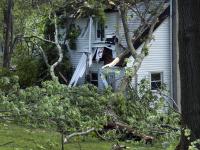 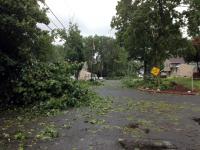 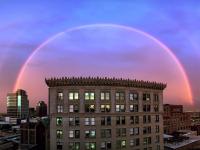 A Potpourri of Weather: June 2017 Summary and Mid-Year Recap 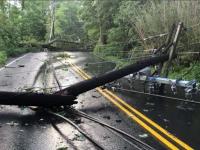