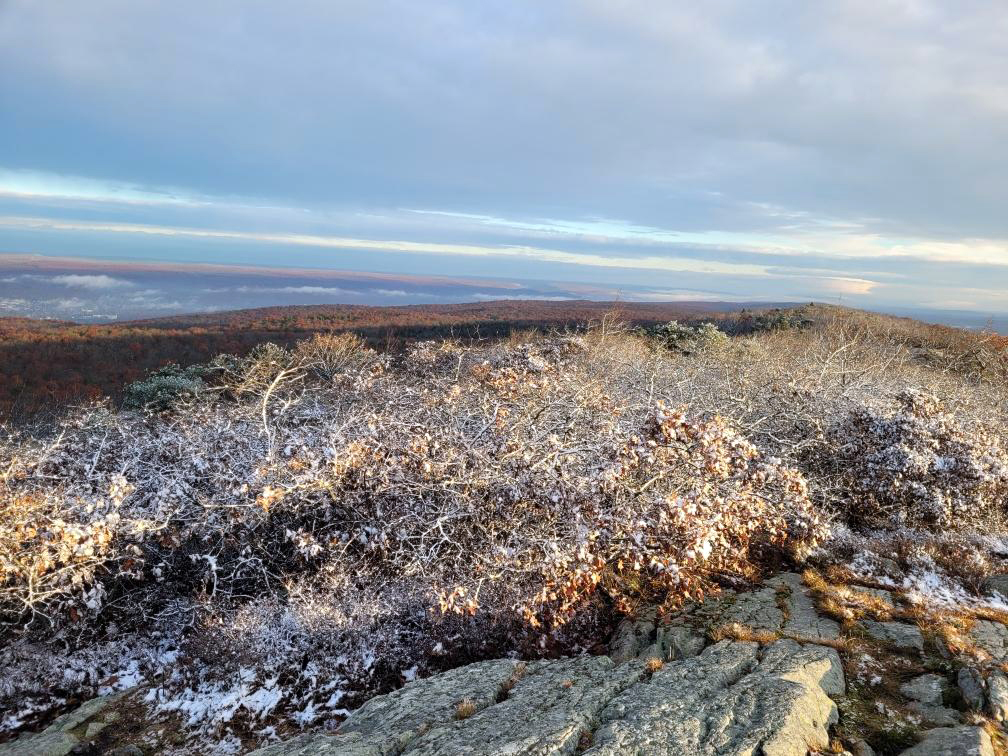 November was the first month since May 2020 with both averages of precipitation and temperature below 1991–2020 normals. The last drier-than-normal month was this past June while the last cooler-than-normal month was this past May. However, it’s been a while, 19 months, since the two anomalies teamed up. And dry it was, with the statewide average of 1.06” running 2.29” below normal. This ranks as the 7th driest November since records commenced in 1895. Only two other Novembers since 1936 fall in the top 10. 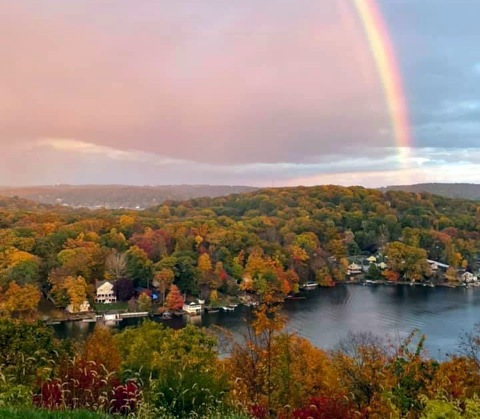 October was the second mildest on record in the Garden State since records commenced in 1895. This follows on the heels of the 11th warmest September, leaving most residents wondering when cool weather would arrive and leaves would turn and fall. For the first time since at least 1900, not a single weather observing station in New Jersey recorded a freezing low temperature on any day in either September or, as is climatologically most common, October. All of this resulted in a leaf season that was delayed by one to two weeks. 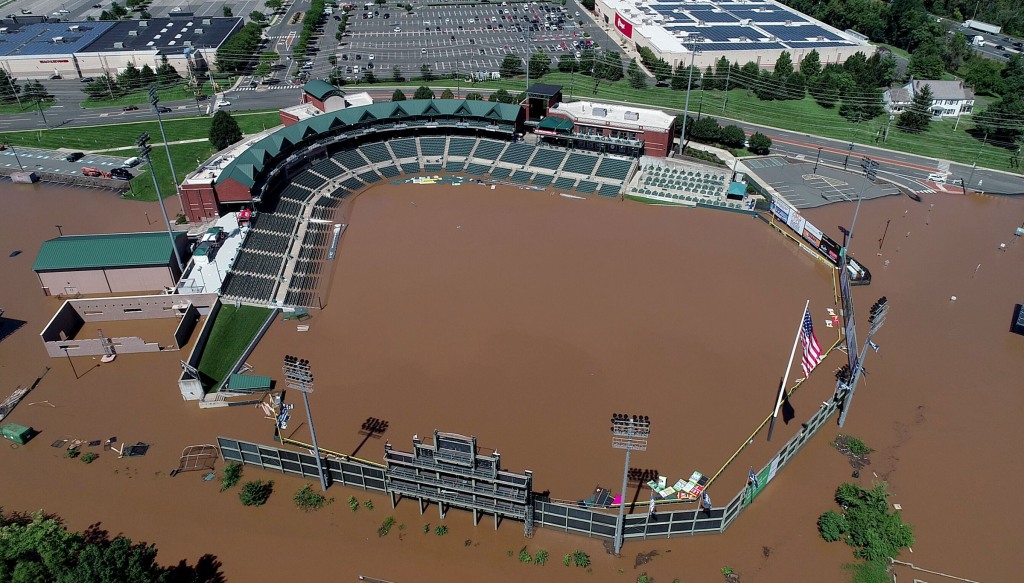 Post-tropical storm Ida. The title of this month’s report speaks to this momentous weather extreme that will forever be the defining event of this month and likely the entire year. The storm delivered the most powerful tornado to strike the Garden State since 1990, demolishing multiple homes in Gloucester County. Rainfall exceeding 3.00” per hour led to the most widespread flash flood event on record for the state, resulting in the tragic deaths of 30 individuals in central and northeastern locales. A separate report on Ida has been prepared and may be accessed in the "News" menu. 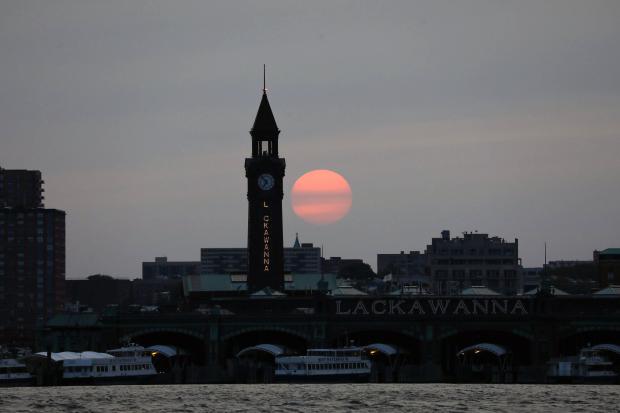 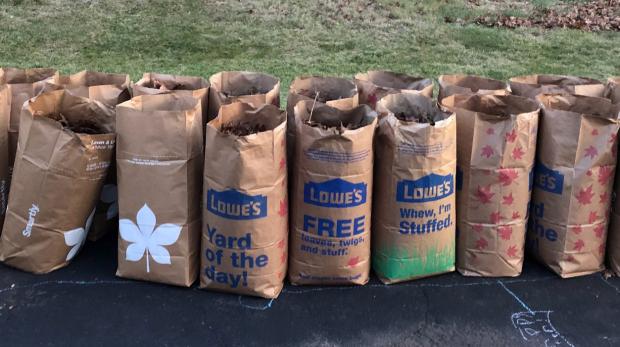 In what has been a monthly see-saw of an autumn in the precipitation department (more below), November totals were on the low side. The statewide average total of 1.83” was 1.78” below the 1981–2010 mean. This ranked as the 22nd driest November since 1895. The northern half of the state averaged 2.31”, which is 1.55” below normal and ranks 31st driest. The south was drier at 1.54”, which is 1.91” below normal and ties with 1991 as the 18th driest. Temperature-wise it was the coldest month compared to normal since last November and, along with March, only the second below average one since then. The statewide average temperature of 41.3° was 3.9° below normal and ranks as the 27th coldest (tied with 1920 and 1955) of the past 125 Novembers. The north average 38.9°, which is 4.2° below normal and ties with six other years as the 24th coolest. The south averaged 42.6°, which is 3.8° below normal and ties with 1954 and 1972 as 27th coolest. Of late, there have been warmer and drier months compared to the norm, such as this past September and colder and wetter months including this past March. However, the last time New Jersey experienced a noteworthy dry and cold month (of any month) was November 2012 when the statewide average temperature was 3.7° below average and the precipitation 2.31” below average. 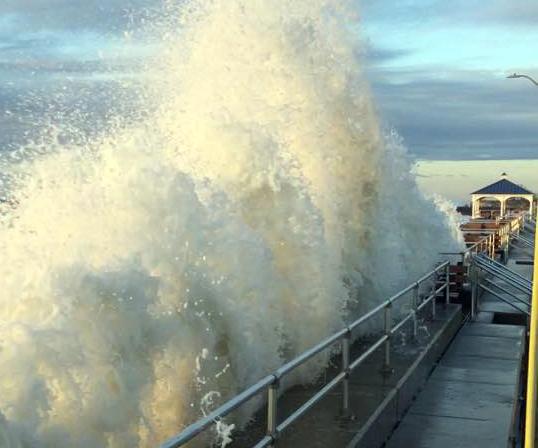 As the 10th month of 2019 commenced, attention was on the continuing flash drought conditions across the Garden State. Lawns had gone brown and shallow rooted trees were losing their dull-colored leaves early. By the second week of the month, the US Drought Monitor showed all of NJ to be in either abnormally dry (D0) or moderate drought (D1) status (full disclosure: my recommendations are taken under consideration by the national author of each week’s map). Several rain episodes in the first half of the month, particularly in the north, began to stall any worsening of conditions. However, it wasn’t until the last half that five events deposited an inch or more, three of them with two inches or more, at a number of locations around the state. Thus by month’s end, only portions of southwest, southeast, and central NJ were rated D0, and the remainder, as we like to say, in “D nada.” This turn to storminess didn’t come without consequences. This included localized flash and small stream flooding on occasion, several episodes of strong winds, and some minor to moderate coastal flooding. More on all of this below, but first to further summarize the month. In the precipitation department, the statewide average was 5.79”. This is 1.90” above the 1981–2010 normal and ranks as the 15th wettest dating back to 1895. North Jersey came in with an average of 6.72”, some 2.41” above normal and ranking 10th wettest. In the south, the 5.28” average was 1.65” above normal and ranks as the 20th wettest.

As if the wet month was not newsworthy enough, the statewide monthly temperature of 58.0° tied with two other years as the 9th warmest back to 1895. This is 3.5° above normal, with northern and southern portions coming in at 3.2° and 3.8° above, respectively. The 2nd was arguably the hottest October day on record, thus also the warmest for so late in the season. Meanwhile, several locations experienced the first freeze of the season on the 4th or 5th, with a more widespread frost and freeze on the 19th. Still, the month ended with only 18 of the 63 NJWxNet stations having fallen to the freezing mark. 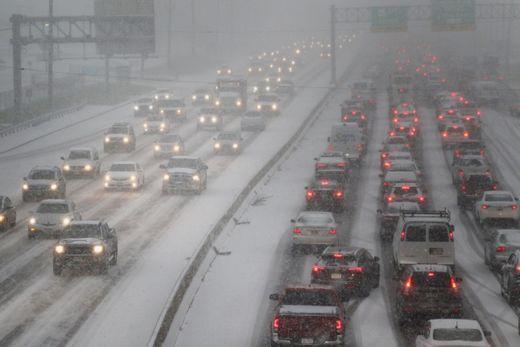 November weather packed quite a punch, putting an exclamation point on what will go into the book as the wettest Fall (September–November) on record (since 1895). With seven storms that each deposited an inch or more of rain (or melted snow) at numerous locations, this was the second wettest November. The statewide average of 8.77” was 5.16” above the 1981–2010 average. The record will remain 9.01” in 1972.

One of the largest early-season snowstorms on record delivered significant impacts to all but southeastern NJ on the 15th. This event alone resulted one of the snowiest Novembers on record. Statewide, the monthly snowfall was 4.1”, which is 3.3” above average and ranks as the 6th snowiest since 1895 and the snowiest since 1989. With 7.4” in the north (Sussex, Passaic, Bergen, Warren, Morris, Essex, and Hudson counties), it was the snowiest November since 1938 and 3rd most on record. Central NJ (Hunterdon, Somerset, Union, Middlesex, Mercer, and Monmouth counties) received 4.8” (+3.9”), the 5th snowiest on record and most since 2012. The south (Burlington, Ocean, Camden, Gloucester, Atlantic, Salem, Cumberland, and Cape May counties) averaged 2.0” (+1.4”), the 10th snowiest and most since 2012. 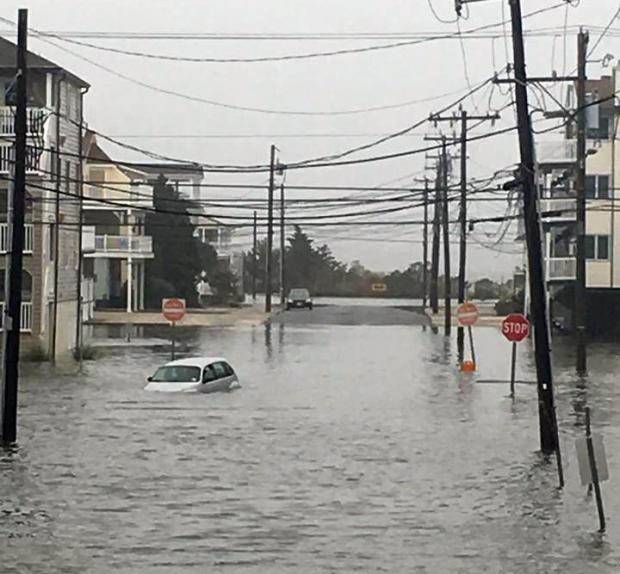 October was a tale of two half-months. Summer-like weather prevailed through the 11th, quickly transitioning to fall-like conditions on the 12th. Passage of the first strong cold front of the season was responsible for the change. Moderate to heavy rain accompanied the front in northwest NJ during the daytime hours of the 11th. That evening, and into the morning of the 12th, moisture from the remnants of once major Hurricane Michael ran up against the front and brought heavy rain to south Jersey. This one-two punch was followed on the 17th by the first freezing temperatures of the season at a few locations and a more widespread freeze on the 19th. Generally cool conditions prevailed the remainder of the month. The remnants of yet another major hurricane, Willa, provided energy and moisture to a quick-hitting nor’easter on the morning of the 27th that brought some of the worst coastal flooding since Sandy in 2012. Michael was an Atlantic storm that made landfall in the Florida panhandle, while Willa was an eastern Pacific storm that came ashore on the west coast of Mexico. 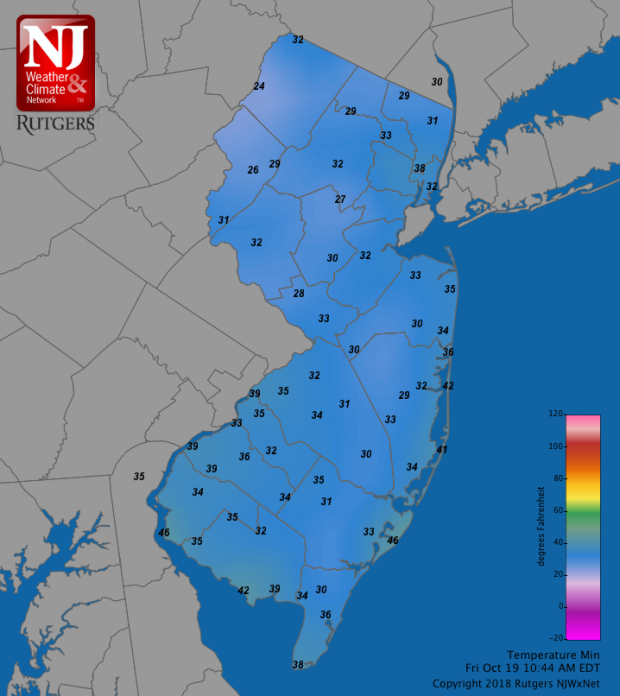 This morning was a frosty one, with many NJWxNet locations across the state seeing their first freezing temperatures of the season. The accompanying map shows that most every location away from coastal and urban environs dipped to the freezing point or lower. Walpack (Sussex County), the traditional cold spot in NJ on calm clear nights, was the coldest spot at 24°. Atlantic City Marina (Atlantic) and Lower Alloways Creek, along the Delaware Bay coast in Salem County, were mildest, with lows of 46°. All other NJWxNet sites were no milder than 42°. One of the more interesting cold readings was the 32° minimum at Jersey City (Hudson). This station is located in Liberty State Park, demonstrating that even parkland within urban regions can get awfully chilly on calm, clear nights. However, it is a bit surprising to see this low, given that the station is quite close to the waters of NY Harbor. 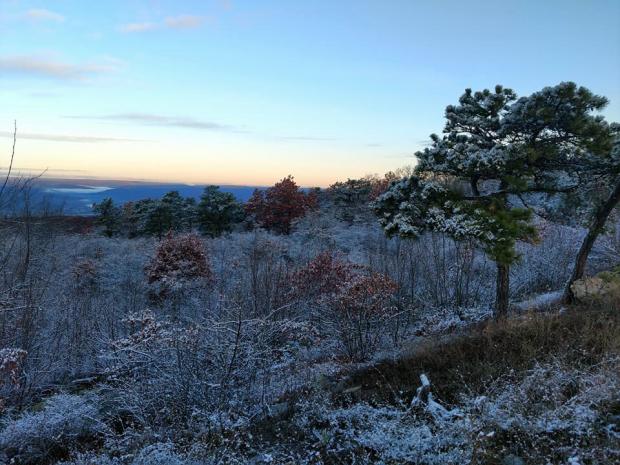 Even in a rather tranquil month, there are always interesting aspects of New Jersey’s weather and climate that can make for memorable situations. Such was the case during the 11th month of 2017. On the heels of a mild October and first week of November came one of the coldest early-season blasts on record on the 11th. Then the 19th saw some of the strongest winds of the year across the state. Overall, dry conditions by month’s end put the northern Highlands in the D0 (abnormally dry) category on the US Drought Monitor map, threatening to expand further into the state should dry conditions persist.

1 mph from the WSW