As some of you may remember, last winter there was a weak La Niña event in the tropical Pacific that followed a strong El Niño in 2015. As most past La Niñas have suggested, due to remote influences on circulation across North America, the winter 2016/17 snowfall in New Jersey was not abundant. Here we are again in a weak La Niña situation as the heart of the 2017/18 winter approaches. Thus far, snowfall is above average, but clearly it is too early to say if this season will end up with a surplus or deficit of the white stuff.

What exactly is a La Niña? Like an El Niño, a La Niña is associated with anomalous atmospheric trade winds and ocean circulation in the tropical Pacific. While an El Niño involves a weakening (or even reversal) of westerly (east to west moving) trade winds along the equator and resultant warming of waters in the eastern equatorial Pacific, a La Niña event essentially involves an enhancement of the more common ocean and atmosphere circulation regimes. Figure 1 illustrates this situation. 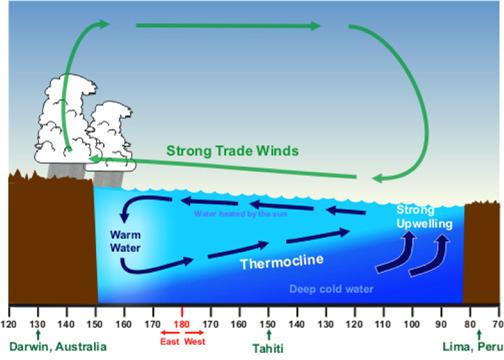 In both El Niños and La Niñas, significant changes in middle- and high-latitude circulations in both the northern and southern hemispheres are found to occur. They include a host of seasonal changes in the weather in the United States. During a La Niña winter, the polar jet stream position typically cuts through the middle tier of the lower 48 states, compared to an El Niño winter, where the jet stream often retreats into Canada (Figure 2).

The Southeastern US tends to be wet and cool during an El Niño and dry and warm during a La Niña, while opposite anomalies tend to occur in the Great Lakes and Ohio Valley regions. New Jersey, being found between these two areas, tends to have rather weak El Niño or La Niña signals. However, with a tendency to have more coastal storms during an El Niño, there is a greater chance for snow, particularly a major storm, during an El Niño winter than in a La Niña winter, where the storm track tends to be through the Ohio Valley, bringing milder air, thus more commonly rain to our region. Examples of the former include the huge snowstorms of February 1983 and January 2016. Meanwhile, many (but not all) La Niña winters have snowfall deficits across NJ (more on this below).

The 2017/18 winter has begun with a weak La Niña event underway. Figure 3 shows ocean surface temperature departures from normal as of December 4th 2017. Note the cooler-than-normal conditions in the eastern and central equatorial Pacific.

Winter maximum and minimum temperature and precipitation (rain and melted snowfall) departures are shown in Figure 4 for the ten weak La Niña events dating back to the winter of 1954/55. There is no consistent tendency for maximum or minimum temperatures, with winters being warmer, colder, and close to average. Nor is there a notable tendency for precipitation, other than that no weak La Niña years exhibited exceedingly wet or dry conditions. 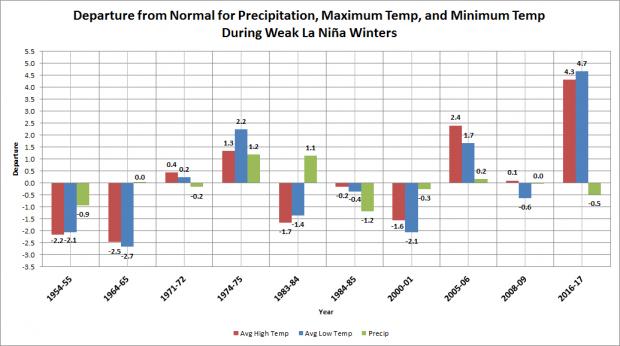 The most interesting relationship, one that was mentioned above, is for La Niña winters to most often have below average NJ snowfall. Figure 5 shows snowfall departures in all La Niña winters between 1950/51 and 2016/17. Only three of the ten weak events had above-average snowfall, and those winters were only 1.7”, 0.8”, and 8.4” above the long term average. Six weak La Niña winters had negative anomalies ranging from 4.2” to 13.4”, the latter value being about half of the average annual statewide snowfall. Thus it is fair to say that no weak La Niña winter has had an abundance of snowfall, but nor has any been among the 10 least snowy winters since 1950/51. Moderate and strong events show more extreme departures in both directions. 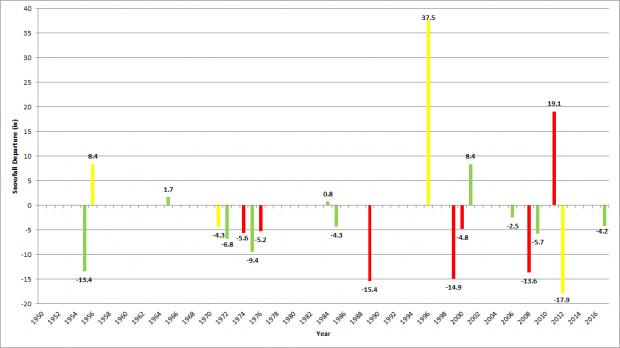 As of the middle of January, seasonal statewide snowfall is running about 5” above what should be expected by this time of the season, temperatures are running a bit colder than normal, and it has been quite dry. There is plenty of winter still to go to see if conditions will at winters end come up close to what has been seen in past weak La Niña winters or whether there will be a surprise or two in store for New Jersey.

4 mph from the NW

Snow, mainly before noon. High near 37. North wind around 10 mph. Chance of precipitation is 90%. Total daytime snow accumulation of 1 to 3 inches possible.