Rutgers Students on the Prowl for Tornadoes

From May 28 to June 10, 2014, 15 aspiring meteorologists from Rutgers University headed on a journey to the central US on the hunt for tornadoes. This trip was a Rutgers course designed to teach students how to forecast severe weather, and actually witness severe storms first hand, with the possibility of seeing a tornado. Tornado chasing popularity has been on the rise because of popular TV shows like Discovery Channel’s “Storm Chasers” and the 1996 movie “Twister.” The media portrays storm chasing as a thrilling adventure, filming scientists and weather enthusiasts that often become overwhelmed by the atmosphere around them. I can personally say that storm chasing can provide an adrenaline rush. However, for meteorologists and students there is also scientific legitimacy behind these chases. Severe thunderstorm and tornado field research is essential in order to gather data to better understand these storms and, ultimately, to save lives. For our class, we were concerned about accurately forecasting, heading out with nothing but a link to radar and a handheld anemometer/thermometer. 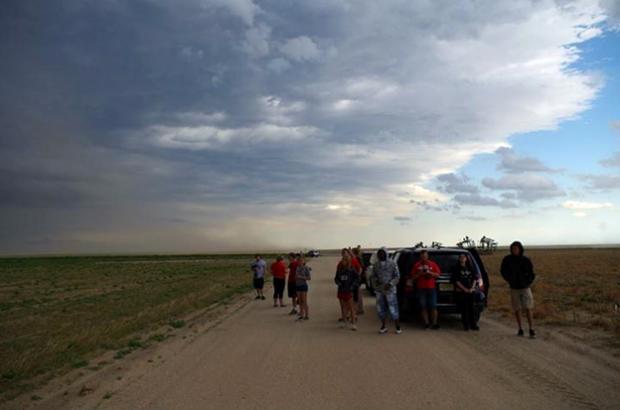 Our group first headed from New Jersey to Nebraska in three minivans. We spent the next two weeks mainly in Nebraska and Kansas, while also doing some chasing in Wyoming, Colorado, New Mexico, Texas, and Oklahoma. Why not stay east and chase? This has to do with tornado climatology, something that is influenced greatly by the regional landscape. The Lower 48 is generally considered to be the tornado hot spot of the world, averaging over 1000 tornadoes per year. The runner up is Canada, which averages around 100 per year. While tornadoes can happen in any state at any given time with the right atmospheric ingredients, there is an area that is more susceptible to tornadoes than anywhere else in the world. Tornado alley, a region that stretches from Texas up to South Dakota and between western Kansas and Ohio, experiences the most tornadoes annually. Texas has the highest average annual number of tornadoes (averaged from 1991-2010) with 155. Kansas averages 96 and Oklahoma 62 per year. This is prime tornado country for several reasons. Tornadoes usually are spawned in supercell thunderstorms, which are more common in the central US than anywhere else in the world. Because of the flat terrain of the Central states, two different air masses from the Gulf of Mexico and Canada collide causing intense thunderstorms. Supercells can last for several hours, making chasing these storms possible.

Back here in New Jersey, there are on average two tornadoes per year. The Storm Prediction Center (SPC) issues one to two tornado watches per year (1993-2012) for New Jersey, while on average 18 are issued for southern Alabama/Mississippi, and about 10-12 are issued in Oklahoma. There is an overall maximum in Alabama and Mississippi mainly because of tropical storms that influence that area. 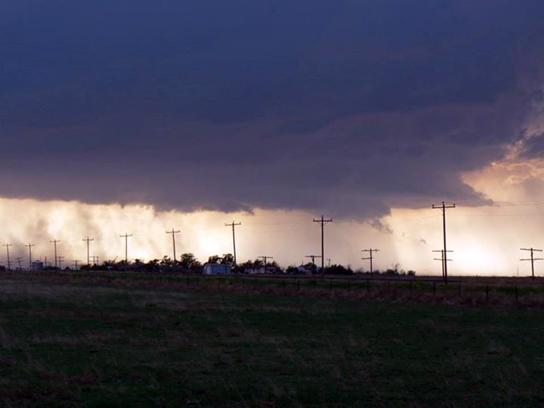 While tornadoes may be somewhat rare in New Jersey, severe thunderstorms are not. The SPC issues around 10 severe thunderstorm watches per year for New Jersey and 15-20 watches for Oklahoma. Historically, there have been 146 tornadoes reported in New Jersey from 1950 to 2013 ranging from EF0-EF3 strength. What all of this means to the chasing community is that while New Jersey experiences severe weather and the rare tornado, the Central US and even the Southeast average many more tornadoes per year. The chart below illustrates the different strength tornadoes that have occurred in New Jersey and Oklahoma, for comparison between the Northeast and Midwest. 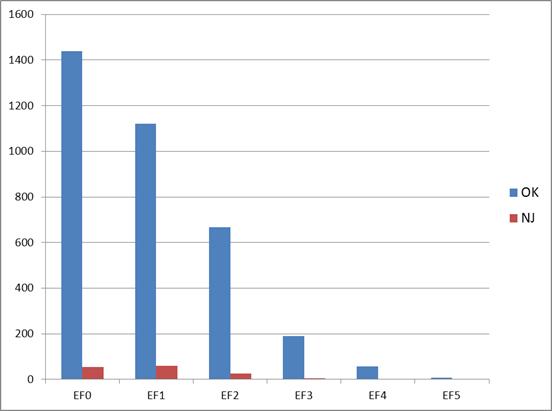 The frequencies of tornadoes by EF scale intensity from 1950-2013 in OK and NJ.

Another reason for chasing these violent storms in the central US instead of the Northeast has to do with safety. Although the storms are usually more severe in the Midwest, it is actually safer to chase them there. The Northeast is heavily wooded, and while the trees provide nice summer shade, they act as a visual barrier between a storm chaser and a storm. In the Central states, there are far fewer trees, and storms that are 15 miles away are completely visible to the observer. The photo below shows the brief tornado that we spotted in New Mexico from about 15 miles away. This is extremely important for safety reasons because if you cannot see a tornado that is less than a mile away, your life could possibly be in danger chasing the storm. The chasing group and I ended up spotting a tornado in northeastern New Mexico, in a hilly area, from about 15 miles away. The photo below shows a very brief tornado touchdown near Clovis, New Mexico, from about 15 miles away. Had we been in the Northeast, the tornado would probably have been completely invisible to anyone a few miles away because of the landscape. The diagram below shows the aboveground woody biomass, or tress, in the US, clearly showing very few trees from Texas northward, where it is ideal to storm chase. 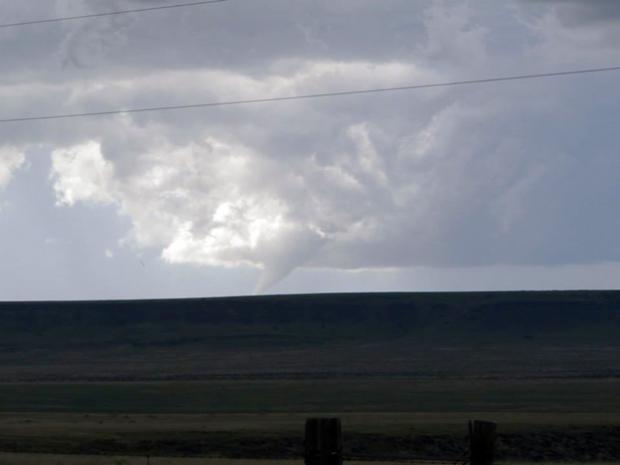 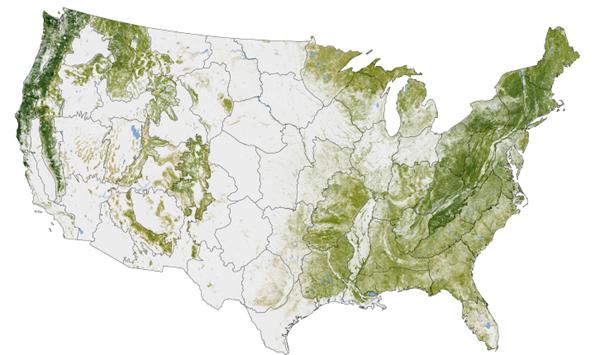 Another huge safety issue with chasing in the Northeast is one thing anyone who lives and drives in New Jersey is very familiar with: traffic. Tornadoes can occur any time the atmosphere has favorable conditions; however, most tornadoes occur between 4PM-7PM. While there is traffic in cities during rush hour in the Central states, there are many areas with small towns and very unpopulated regions, making for a mostly traffic-free chase. Last year, a deadly tornado that struck Moore, Oklahoma, around 3 PM local time wreaked havoc on a densely populated area just south of Oklahoma City. Eleven days later, a tornado was heading toward another portion of this metropolitan area, El Reno, Oklahoma. Mike Morgan, chief meteorologist for KFOR in Oklahoma City, received criticism when he advised residents to leave their homes and head south, away from the storm. Some residents, still scarred from the tornado 11 days earlier, decided to heed this advice and try and outrun the tornado, where they ran into several traffic jams. Luckily, the tornado did not cross one of the several highways that were packed with fleeing residents, but three storm chasers tragically lost their lives on that day on rural roads, as the storm behaved quite erratically.

An additional road-related issue that could arise in the Central states is the fact that there is not a very good road network outside of the major cities. Storm tracks are generally predicable, however, while chasing, it is best to have multiple escape routes in every direction. There are major highways in the central US, however there are very few road networks that have north-south and east-west roads readily available in areas that are not major cities. Another issue is that there are several unpaved, unmarked roads that are susceptible to flooding and may become impassable. As the Rutgers chasing group and I learned, even paved highways can fall victim to flash flooding. 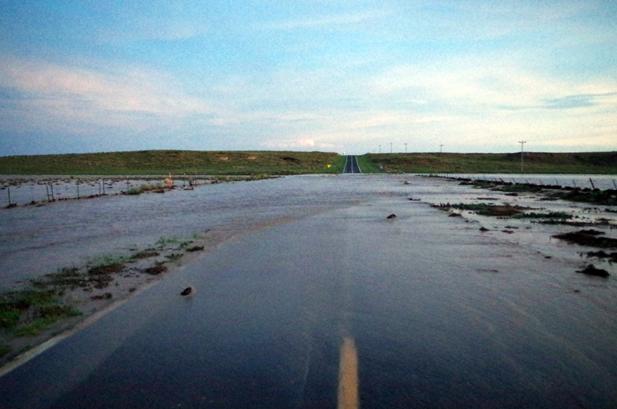 Overall, very little traffic, great visibility and a much higher risk of tornadoes and supercells are the main reasons to leave the Northeast and chase in tornado alley. This trip has taught my classmates and me that while there’s no place like home, there’s nothing like the storms in the Central US. Driving over 7000 miles in two weeks, long nights chasing, and eating fast food every day was completely worth being able to see supercells, crazy lightning and wind, gustnadoes, and even a tornado from 15 miles away.

July 2020 was the hottest month on record for the Garden State since records commenced in 1895. The statewide average temperature of 78.8° was 4.2... more

8 mph from the WSW

A slight chance of showers and thunderstorms after 3pm. Patchy fog before 9am. Otherwise, mostly sunny, with a high near 81. South wind 10 to 15 mph. Chance of precipitation is 20%.

A chance of showers and thunderstorms, mainly after noon. Partly sunny, with a high near 81. South wind 5 to 10 mph. Chance of precipitation is 40%. New rainfall amounts of less than a tenth of an inch, except higher amounts possible in thunderstorms.

A chance of showers and thunderstorms. Mostly cloudy, with a low around 73. South wind 5 to 10 mph. Chance of precipitation is 40%. New rainfall amounts of less than a tenth of an inch, except higher amounts possible in thunderstorms.

A chance of showers and thunderstorms. Mostly cloudy, with a high near 81. Calm wind becoming southeast around 5 mph in the afternoon. Chance of precipitation is 40%. New rainfall amounts of less than a tenth of an inch, except higher amounts possible in thunderstorms.

A chance of showers and thunderstorms. Mostly cloudy, with a low around 73. Chance of precipitation is 40%. New rainfall amounts of less than a tenth of an inch, except higher amounts possible in thunderstorms.

A chance of showers. Mostly cloudy, with a high near 78. Chance of precipitation is 50%.

A chance of showers. Mostly cloudy, with a low around 72. Chance of precipitation is 50%.

A chance of showers. Mostly cloudy, with a high near 78. Chance of precipitation is 40%.

A chance of showers. Mostly cloudy, with a low around 72. Breezy. Chance of precipitation is 40%.

A chance of showers. Partly sunny, with a high near 78. Breezy. Chance of precipitation is 30%.

Mostly cloudy, with a low around 72.

A chance of showers. Partly sunny, with a high near 79. Chance of precipitation is 30%.