The several-hour-long downpour that drenched parts of Mercer and Middlesex County on the afternoon of July 30, 2016, represented an exceptionally rare event for the area. Afternoon and evening thunderstorms dropped 7.23” in West Windsor (Mercer County), with Plainsboro (Mercer) reporting 5.15”, South Brunswick (Middlesex) 5.03,” and North Brunswick (Middlesex) 4.90”. These rainfall totals were measured by volunteer weather observers in the Community Collaborative Rain, Hail, and Snow (CoCoRaHS) network, providing vital precipitation data that would otherwise be nonexistent. The bulk of the rainfall occurred during a roughly 3-hour period from 2:45 PM through 5:45 PM, with the most torrential rainfall occurring along and just south of Route 1 from Princeton Junction (West Windsor Twp.) east northeast to Monmouth Junction and Dayton (South Brunswick Twp.). An animated radar loop taken from the National Weather Service’s WSR-88D polarimetric radar (located at Fort Dix) from the afternoon of July 30 can be viewed here (note: this is a large 130 MB file and may take some time to load).

The kind of thunderstorm complex that affected the Princeton area is referred to as “back-building”, which is a type of “training” thunderstorm (think of cars on a railroad track) notorious for its flash-flooding capabilities. In these types of events, cool storm outflow creates what can be described as a small-scale cold front, which acts as a lifting mechanism for new thunderstorm cell development on the upwind (usually southwest) side of an active thunderstorm. The result is a seemingly stationary or even backwards-propagating cluster of thunderstorm cells that can drop prodigious amounts of rain in localized areas. A schematic of this feature from Schumacher and Johnson (2005) is shown in Fig. 1. Repeated regeneration of new thunderstorms close to a nearly stationary outflow boundary was apparent in the radar imagery as the event unfolded (Fig. 2). 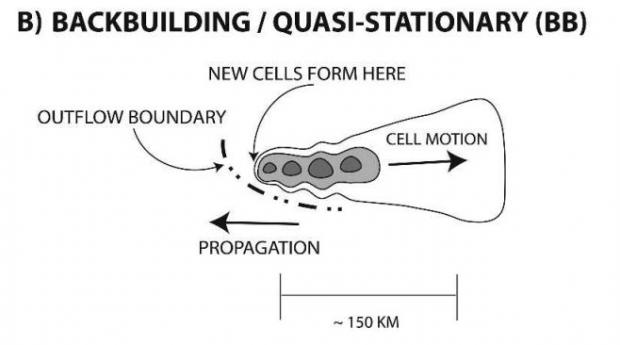 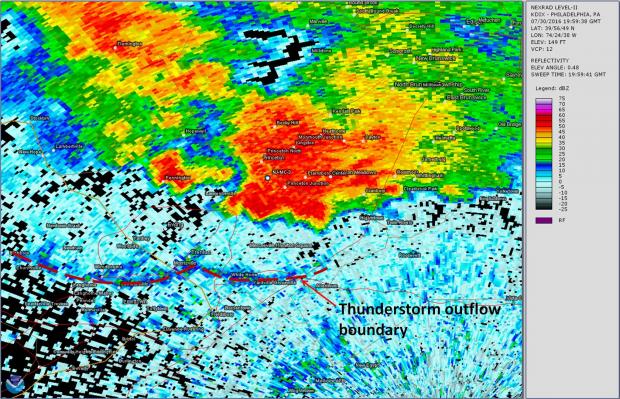 A CoCoRaHS volunteer located in West Windsor (NJ-MC-3; around 1.5 miles south of downtown Princeton) reported a rainfall total of 7.23” for the 24-hour period ending at 8:00 AM on July 31. The observer noted that this rain was the result of a “heavy downpour lasting for almost 3 hours,” and indeed radar imagery suggests that the vast majority of 7.23” accumulation occurred during the 3-hour period from around 2:45 PM through 5:45 PM.

In looking more closely at the intensity and duration of this event, some estimation can be made about the rare nature of the episode. Radar-based precipitation estimates suggest that only 0.02” had fallen at NJ-MC-3 up through 2:47 PM, just prior to when the heavy rain began (Fig. 3). By 3:59 PM, radar-estimates suggest that 3.14” had accumulated at NJ-MC-3, nearly all occurring over the previous 75-minutes (Fig. 4). The radar estimate from around another 60 minutes later (5:00 PM) indicated a cumulative rainfall total of 4.83” (Fig. 5). Finally, the torrential rain tapered to light/moderate rain by 5:45 PM, with the radar estimated rainfall at NJ-MC-3 totaling 5.19” (Fig. 6). Periods of light to moderate rain continued through the late afternoon and evening in the Princeton area, but the radar-estimated rainfall after all precipitation had ended around 10:00 PM showed an additional accumulation of only 0.15” (an event total estimate of 5.34”). 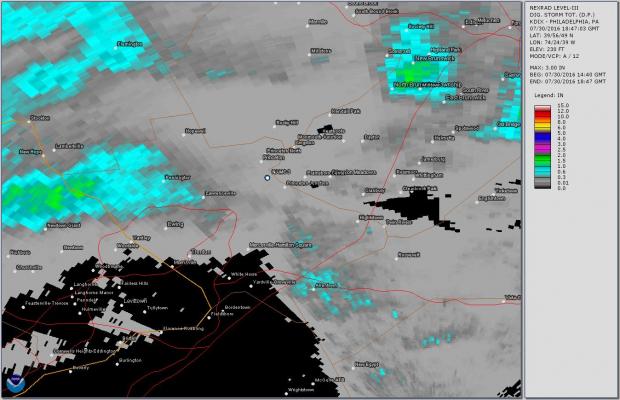 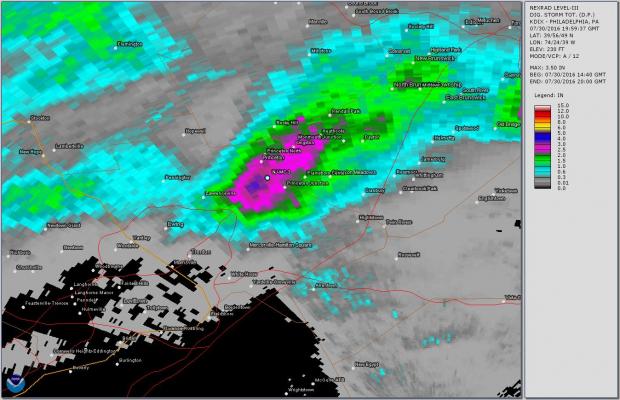 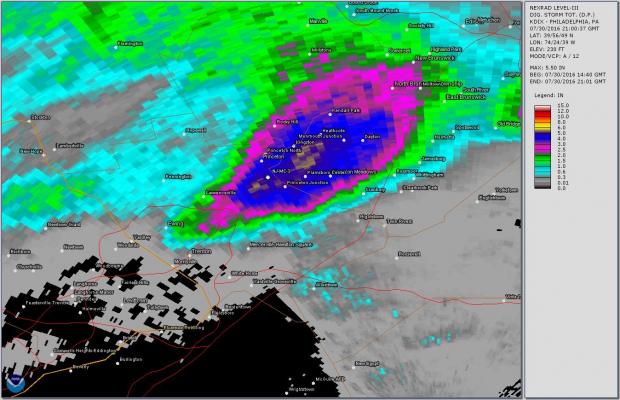 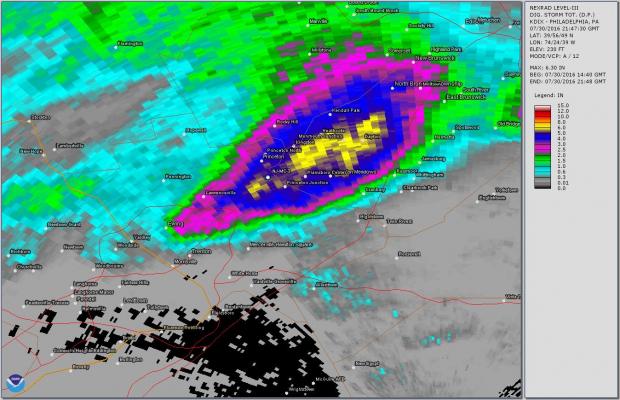 Comparing the gauge-measured rainfall total of 7.23” to the 5.34” radar-estimated rainfall at NJ-MC-3, it is apparent that the radar-estimate for this location is around 26% too low. This is not surprising, as despite improvements in radar technology and rainfall rate estimations, there remains inherent uncertainty regarding the exact raindrop size distribution present in a given thunderstorm, and this strongly controls actual rainfall rates during a storm’s life. That said, the radar estimates should still provide a good approximation of the percentage of the total rain that occurred during the 3 hour period from 2:47 PM through 5:47 PM. The 3-hour radar estimate of 5.17” (5.19” estimate at 5:47 PM minus 0.02” as the storm was beginning 3 hours earlier) represents 96.8% of the 5.34” estimated total. Applying that to the 7.23” gauge-measured event total at NJ-MC-3 suggests that around 7.00” of rain occurred during this 3-hour period!

To put the extreme nature of this event into context, we can refer to NOAA’s Atlas 14, which contains precipitation frequency estimates for a number of different event durations (e.g., 1 hour, 2, hour, 3 hour, 24 hours, 48 hours, etc.). This ongoing project of the National Weather Service seeks to estimate the probability that an extreme precipitation event of a certain magnitude can be expected to occur at a particular location in a given year. For instance, if the atlas suggests that the “average recurrence interval” of an 8.00” 12-hour rainfall is 200 years, this implies that an 8.00” rainfall occurring over 12-hours at a specific location can be expected, on average, once every 200 years (or, alternately, possesses a 0.5% chance of happening in any given year) based on the current state of the climate. More uncertainty in these statistical estimates is inherent when considering longer average recurrence intervals (like 500 or 1000 years), as most precipitation data used to develop these estimates only cover multiple decades, and therefore usually don’t capture the most rare of events. Still, these estimates provide some concept about how uncommon a given precipitation event might be. Atlas 14’s precipitation frequency table for the Princeton/West Windsor area shows that a 5.99” rainfall over 3 hours has an average recurrence interval of 1000 years (with 90% confidence interval limits of 5.09” and 6.75”). In other words, NOAA’s precipitation frequency estimates suggest that the approximately 7.00” that fell near Princeton on July 30 was less common than a 1 in 1000 year event (less than 0.1% chance of happening in a given year). Despite the uncertainties and assumptions involved with computing estimates for such long recurrence intervals, it’s safe to say that the 3-hour July 30, 2016, deluge in West Windsor and neighboring areas of Mercer and Middlesex counties was a remarkably extreme and rare occurrence, and one that residents are unlikely to experience again in their lifetimes.