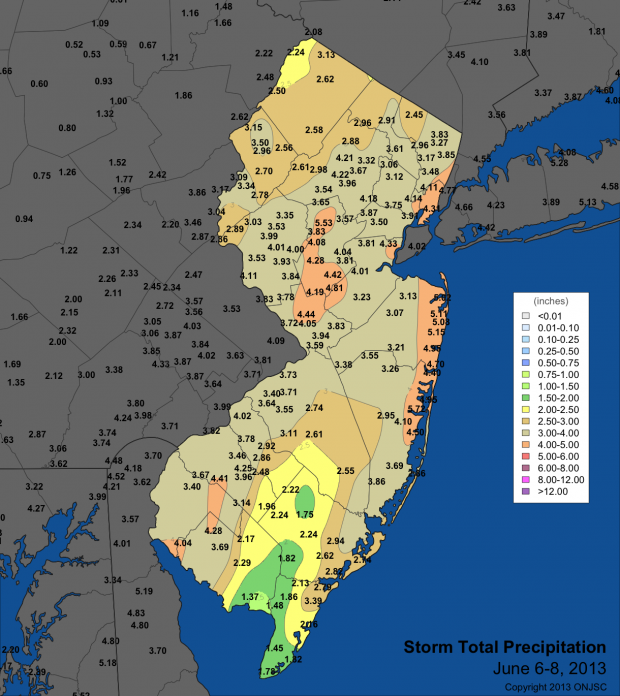 Since this past June there have been 13 events that deposited at least 3.00" of rain at one or more locations the Garden State. Six of these events maxed out at greater than 5.00". Including the 13 listed below, there were 27 events from June through September 2 where an inch or more accumulated at one or more NJ locations.

The 3.00" plus storms are listed in chronological order, including the date, amount and location where the greatest total was observed.

The maximum amount for each event was determined from an evaluation of more than 250 precipitation gauge totals throughout the state. As many as 200 observations were contributed by citizen scientists participating in the NJ Community Collaborative Rain, Hail and Snow Network. Approximately 50 reports came from NJ Weather and Climate Network automated stations and over 30 from National Weather Service Cooperative Observer stations. In a few cases, NWS Storm Spotter reports contributed. Perhaps not too surprisingly, the maximum value in 12 of the 13 events came from a CoCoRaHS station. The August 8-9 observations came from a NJWxNet station.

I have been asked if any of the event counts represent seasonal records. Unfortunately that can't be determined, as never before have so many precipitation gauges been distributed across New Jersey! With so many gauges, it is "easier" to find a large total, thus impossible to compare counts, or event rain totals for individual events, to past records. The ONJSC plans on evaluating seasonal event counts using long-term NWS Cooperative Observer station records, however even those results will have some uncertainty, as stations have come and gone, with Coop numbers rising and falling a bit over the decades.

For now, suffice it to say that this second wettest summer on record (see August/summer narrative on the ONJSC website for more information) included an above average number of drenching rainfall episodes. This kept river, ground water and reservoir levels above average throughout the 2013 summer and lawn mowers active!